Sorry! You missed Queen Naija at The Norva 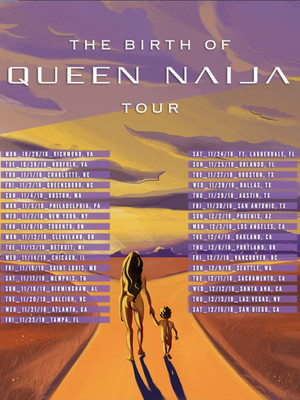 The new queen of R&B has arrived

The Birth of Queen Naija

Youtube star, ex American Idol contestant and now the new queen of R&B, Queen Naija has announced that she'll be heading out on her first tour as a recording artist! Entitled 'The Birth of Queen Naija' the R&B songstress takes her explosive debut single Medicine from her EP to fans across the nation.

After a somewhat rocky, yet stand-out year, the rising star saw her marriage break down in an epic battle of cheating allegations, but also saw her debut single hit the top 50 on the Billboard Charts as well 30 million streams on Spotify. With her smooth and distinctive R&B melodies Queen Naija has pleased fans by bringing the genre back to its roots instead of dressing up into mass-selling pop.

Sound good to you? Share this page on social media and let your friends know about Queen Naija at The Norva.